Handong in the News
Handong In The News
HGU Hosted Special Lecture on ‘Peace in Middle East: Do We Have Solutions?’ by Prof. Raphael Israeli from Hebrew University of Jerusalem
writer: 영문 관리자   |   date: 2018.05.04   |   count: 766 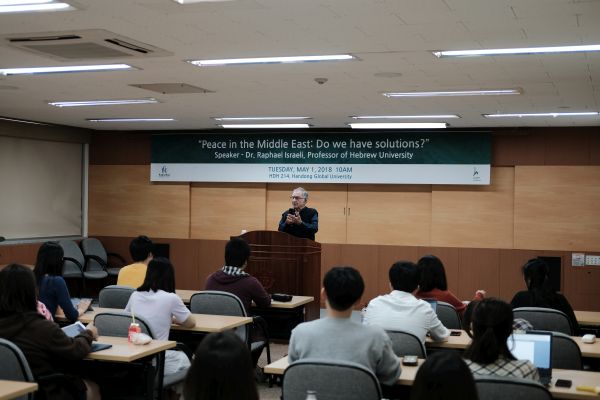 Handong Global University (HGU, President Chang, Soon Heung) held a special lecture on “Peace in the Middle East: Do we have solutions?” in Hyundong Hall room 214 on May 1st, 2018 by inviting Professor Raphael Israeli of Hebrew University of Jerusalem.

During the special lecture, Prof. Israeli explained that there are intertwined political and religious issues to the tension between Israel and Palestine, such as internal political conflicts in Palestine and relations to other Islamic nations. In this regard, the professor assessed the tension to be a conflict among 57 Islamic countries around the world, rather than just a problem of two different groups. In addition, he reasoned that the peace in the Middle East requires legal recognition among nations and positive public awareness of other countries as its basis. During the Q&A session afterwards, the professor explained about principal conflicting factors between Islamism and Judaism, while pointing out one-by-one the relationship and differences of the two religions with Christianity.