- Based on the practical cooperation with PUST (Pyongyang University of Science and Technology), HGU carries forward invitation of North Korean students, dispatching faculty…etc in order to support their learning.

- Construction of Handong Unification Center (tentative name) near the DMZ, as a place to cultivate talents, preparing for the era of unified Korea

Handong Global University (President SoonHeung Chang, HGU), together with the president and faculty of Pyongyang University of Science and Technology (President YooTaek Jeon, PUST)※ held a workshop and discussed the measures for cooperation on the 20th of August. (Photo 1) Primarily, they plan to help PUST from the deadlock in the fields of education · scientific technique. PUST is the only South-and-North Korea established university aiming for the development of North Korea’s information science technology and business · economics fields. Faculty including the president of PUST are foreigners from about 10 countries all around the world and half of them hold American citizenship. Since August last year, the U.S. government has forbidden trips to North Korea and on August 31st this year, the U.S. government has extended the period for another year. Since this rule has not changed, the faculty that hold an American citizenship, including the President, have not had the chance to visit their university.

In the last 20 years, HGU has been working and interacting consistently with Korean-American scholars and PUST, for the project of preparing for unification. (Photo 2) At this time, encouraging talented people and leaders of Unified Korea are important. If students of North Korea want to study in Korea including HGU, they will be strongly supported, They can be provided online lecture contents and a professor can be dispatched if necessary. In order to carry out this plan, HGU is going to cooperate with universities in Korea and institutes for an active and practical cooperation with PUST. 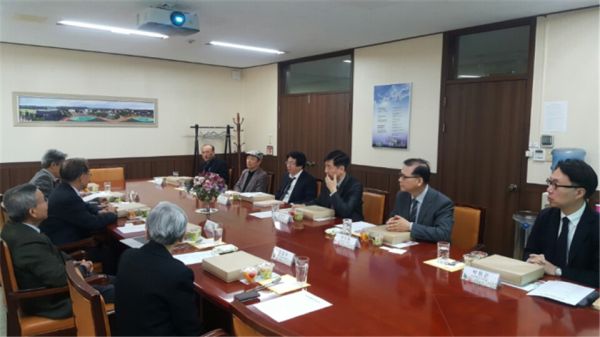 HGU will actively cooperate for the stabilization of PUST. HGU is in the process of establishing a center near the DMZ which will help North Korean students’ studies. Also, the center will study and carry out education and policy related to unification. Through this center, the curriculum will gradually expand and include majors such as economic development, company management, entrepreneurship, and also engineering science that are necessary for development of North Korea. In order to achieve this, HGU will ask for cooperation to the faculties of HGU and PUST, businessmen and professors in America, Canada, Australia and Europe, and authorities concerned. To help the revitalization of the North Korean economy and to strengthen cooperation between the South and the North, it is planned to continue researching on how to achieve a peaceful unification and about the rich underground resources of North Korea such as iron ore, coal, tungsten…etc. HGU is running various programs such as the free semester system, internships, voluntary services…etc by establishing a Handong Global Center not only in developed countries such as Washington DC, Silicon Valley, Israel but also in developing countries such as Nairobi of Kenya, Accra of Ghana, Arequipa of Peru…etc. It builds and expands Handongs global network.

HGU is a leading University of UNITWIN ※(University Twinning and Networking) program. HGU which was appointed in 2007. HGU has been preparing for the time of openness of North Korea by implementing Global Entrepreneurship Training, start-up, small business empowerment seminar in developing countries. Every year (photo 3&4) through joint curriculum, degree course and entrepreneurship training in developing countries that claim to support socialism such as Vietnam, Cambodia, Myanmar, Uzbekistan, Mongol, HGU has been preparing for the day North Korea opens. Also, HGU, UN Academic Impact※ Global Hub University, strives to expand global citizenship education and fulfill sustainable development goal with its specialized globalization education in cooperation with the UN. HGU will try its best to spread these efforts to researches and activities that are related to the North Korean regions and toward unification.

HGU is located in Pohang, Gyeongsangbukdo and since its opening in 1995, it has been striving to foster talented students with love and wisdom that can change the world. Under the motto “University preparing for Unification”, HGU saw unification not only as a regional conflict but also as an issue that might bring global effect. It recognizes unification as a field that requires various interdisciplinary linkage study and education. In addition, as a part of United Korea Project ※ which is the second project among ’10 World Changing Projects” that HGU claims to support, it is strengthening practical cooperation with PUST. Especially basing on the specialized character-building education, a strength of HGU, it will consistently strive on unification issues through ▲leader training education after unification ▲developing unification convergence curriculum ▲developing education and social adaptation program for North Korean students after unification ▲developing program for recovery of homogeneity of North and South Korea ▲build network with institutes inside and outside Korea ▲publish studies, researches, reports ▲hold seminar · workshop.

President SoonHeung Chang said “I hope that the cooperation with PUST and establishing Handong Unification Center (tentative name) will play a key role both in providing a blueprint for Unified Korea and preparing for unification. I expect that the talented students, through this cooperation and the center, will obtain sense of duty to take in the leading part for the future of Unified Korea and become pioneers who establish this vision”. Also, he said “We aim that PUST, the only South-and-North Korea established university, will be managed soundly. Through this, talented students can prepare for the era of Unified Korea. Together with peace settlement of Korean Peninsula with North Korea’s complete denuclearization, we are planning to carry out education, start-up, studies and seminar programs by establishing Handong Unification Center (tentative name) near the DMZ. Big issues such as denuclearization and termination of war is very important in inter-Korean relations. However, together with these issues, detailed and practical cooperation through software elements such as education, culture, sports will enable inductive approach for the improvement of inter-Korean relations”.

※ PUST is the only South-and-North Korea established university that was established with the help of overseas Korean from all around the world such as US, Canada, Europe…etc. The university was established for the development of information science technology and business · economics fields of North Korea. PUST is located in Seung-ri dong, Rangnang-guyok, Pyongyang which is the land provided by North Korea. The site is 1 million square meters. The university was opened on September 16, 2009 with aims to bring peace in the Korean Peninsula, internationalization and economic independence of North Korea and to provide a field of international academic exchange.

※ UNESCO UNITWIN (UNITWIN; University Twining and Networking) is a program established in 1992 by UNESCO. It is managed with the goal to reduce knowledge gap and raise independence ability in developing countries by supporting their university education and research institutes by forming network between universities of developed countries and the universities of developing countries. In 2007, HGU was designated as the first UNITWIN leading university in Korea.