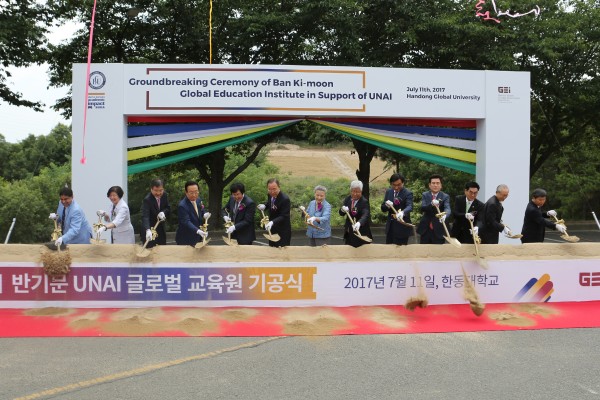 The ground-breaking ceremony for the ‘Ban Ki-moon Global Education Institute in Support of UNAI,’ hosted by Handong Global University, President Chang Soon-Heung, and Korea’s Association in Support of United Nations Academic Impact (UNAI Korea), Chairman Young-Gil Kim, was held in in Handong Global University’s All Nations Auditorium on the 11th of July.

In his welcoming address, Handong Global University President Chang Soon-Heung stated, “Today is the founding day of the Ban Ki-moon Global Education Institute, and the institute is significant in three ways. Firstly, it will become a place of training for convergent and integrated talent and ideas for world peace and prosperity. Secondly, it will become a place that will pioneer in achieving the Sustainable Development Goals, and thirdly, it will allow Handong Global University and UNAI Korea, both pioneers in global citizenship education, to play an increased role in the future.” He continued, “Also, achieving the Sustainable Development Goals through global citizenship education is the mission of our times. Now is a time that calls for specific actions in unity and cooperation that goes beyond mere interest. I ask for your attention and support as the GEI grows into a hub for global citizens.”

In the following speech, the Eighth Secretary-General of the United Nations Ban Ki-moon stated, “As Handong Global University establishes the GEI, I eagerly look forward to the school becoming a leader in global convergence education.” He added, “I also expect that the institute will produce creative global professionals through its innovative global convergence education and also that young men and women from Korea and the rest of the world trained here will make their way into various fields such as international development cooperation. I shall also provide support and aid to GEI in hopes that it will produce leaders in the fields of international organizations and international development cooperation.”

Additionally, 2nd Vice Minister of Foreign Affairs Cho Hyun said in his congratulatory speech, “I anticipate that the Global Education Institute founded today will contribute greatly to expanding the values and need for global citizenship education to the world.” He continued, “I pray that the GEI will grow into a leading establishment in global citizenship education, and I promise that the government will provide as much support to help it achieve this.”

After these addresses came the report on the proceedings presented by Dean of International Affairs Jae-Chun Won and the screening of the promotional video for GEI. Following this, the School Board President Jae Hoon Lee stated in his congratulatory speech, “That Handong Global University acquired the chance to help out in achieving the United Nations’ Sustainable Development is a blessing from God, and it is also an opportunity.” He added, “Handong Global University and the GEI will make its way into the world, and other member schools of the UNAI and their students will together serve Korea’s society and also make their way into the world.”

In his following speech, UNAI Korea Chairman Young-Gil Kim said, “What this world needs is a type of education that does more than simply transmitting knowledge by sharing the acquired knowledge with others and actually carrying it out through actions around the world.”

The GEI is a professional operational entity for global citizenship education. The GEI is responsible for achieving the UN Sustainable Development Goals, SDGs for short, and also for training global professionals required for this effort. By utilizing their accumulated expertise and networks, Handong Global University and UNAI Korea has plans to carry out collaborative research projects with approximately 1200 universities and organizations around the world that are members of the UNAI, out of which 68 are located in Korea. They will also  conduct comprehensive research and education on the UN SDGs as well as train professionals of the UN SDGs. In addition, the GEI will also have educational interchange with the UNAI ASPIRE (Action by Students to Promote Innovation and Reform through Education), a student organization that provides global citizenship education to high school and university students. Through this, the GEI will promote the execution and expansion of the global citizenship education and contribute to the achieving of the UN SDGs. 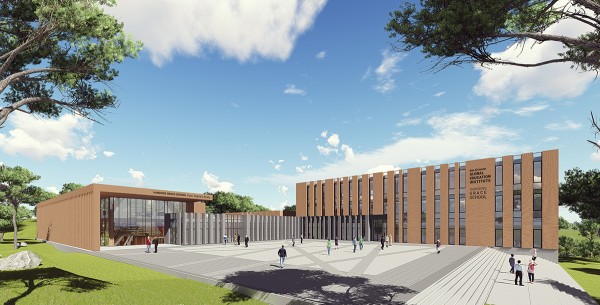 With two three-story buildings that are as big as 3,441m^2, the GEI will be built on the site that is currently a white radish field. The GEI will be divided into the Handong GRACE School and the Ban Ki-moon Sustainable Development International Research Center, BKM SDIRC for short. The Handong GRACE School will be a place that trains future talent through holistic global citizenship education. The school will house a Handong Open Digital Library that allows discussions and a real time searching system for a digital database, an international conference hall with a capacity of 200 people, and a cafeteria. In addition, the BKM SDIRC will aim to become a site for conducting comprehensive research on the UN SDGs, providing aid to developing countries, and training young leaders associated with the UN SDGs. The BKM SDIRC will be designed to hold laboratories, lecture halls, seminar rooms and a UN gallery that will allow visitors to learn about the UN’s education history and former UN Secretary-General Ban Ki-moon’s achievements and legacy.

Furthermore, Handong Global University has been producing visible results through its globalization education. In addition to its selection as a UNAI Global Hub university, Handong has also been named as a UNITWIN (UNESCO University Twining and Networking) host school. The school’s library was also designated as a UN depository library in 2016. Handong’s curriculum is also focused on internationalization. The school has major courses that are fully conducted in English that include the majors GM, IT, and UIL. Not only that, it made an agreement with the OECD and provides its students with opportunities to work as an intern at the OECD headquarters in Paris, France.

Handong Global University’s unique education system that includes its globalization education has not only seen success internally and externally, but it has also led to high student satisfaction. According to E-Daily and Joongang Daily’s reports in 2016, the dropout rates for Handong students scored the lowest among Korea’s four-year universities with a 1.3 percent and ranked second on the list of non-capital region universities with low drop-out rates.

- The UNAI (United Nations Academic Impact) was proposed by the former Secretary-General Ban Ki-moon in 2008 and was officially established as a UN global program in 2010 for the purpose of effectively achieving the 8 UN MDGs (Millennium Development Goals) established in 2001 through receiving support from the world’s higher educational institutions in the form of education and research. The UN had effectively started collaborating with universities all around the world in order to discuss, solve, and come up with plans to eradicate poverty, improve human rights, eradicate illiteracy, obtain sustainable development, and solve disputes through education.

- UN Sustainable Development Goals: Agenda items that the UN has adopted in 2015 and need to be achieved by 2030 as part of the ‘Agenda 2030.’ They include 17 goals that include goals that seeks to ‘Leave No One Behind’ through goals that aim to 1) End poverty in all its forms everywhere, 2) Ensure sustainable consumption and production patterns, and 3) Achieve gender equality and empower all women and girls.

- UNESCO UNITWIN (University Twining and Networking): A program established by UNESCO in 1992. It was conceived as a way to advance research, training and program development in all of UNESCO’s fields of competence by building university networks and encouraging inter-university cooperation through the transfer of knowledge across borders.

- UIL: US and International Law. A bachelors’ degree course for American law and international law.

- Dropout rate: The percentage of students who drop out or take a leave of absence and do not return to and register at school. Shown to have correlation with student satisfaction.